In the October half-term, we went joined in to dig various test pits in local residents’ gardens. Councillor Rob Adams kindly let us use his farm as a base and also his fields to dig some test pits. The dig was set over two days where the young people learnt how to professionally dig for treasure from start to finish, documenting everything along the way, from the colour of the soil, how deep the test pit was to what was found – or not found (just as important!). The young people found at least 500 years’ old worth of clues about the village’s history. There were several pieces of medieval 15th century pottery, as well as some large yellow and brown pieces of 17th – 18th century ‘slipware’ pots, along with lots of other Victorian and 20th century finds. The medieval pottery is the first concrete evidence that people were living there in medieval times, so a really important discovery! As well as pottery, they found quite a few animal bones, which are probably leftovers from the kitchen and a large animal tooth. 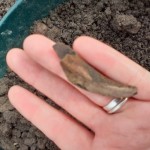 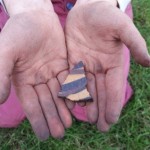